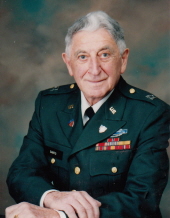 Arthur W. Santo, (Ret. Capt. US Army), age 98, of Woodbridge, formerly of Hamden, passed away on September 5, 2014. Born in New Haven on May 19, 1916, he was a son of the late Angelo and Concetta Gillette Santomassimo. Arthur was predeceased by his wife Josephine A. Petrillo Santo. He was the beloved father of Cynthia (Greg) Foster, of Hamden and Arlene (David) Fappiano, of Wallingford. He is also survived by four grandchildren, Karen (Joseph) Vaiana, Gregory (Liz) Foster, Kristina Guerrera and Myriah Fappiano; two great-grandchildren, Marissa Vaiana and Derek Perry and a sister, Anna Massi, of Scottsdale, AZ. Arthur was predeceased by his brothers, Edward, William, Domenick and Peter Santomassimo, Louis and Joseph Santo and a sister, Sandria Crescenzo. Arthur was a graduate of Commercial High School in 1936 and a proud Veteran with 28 years of service in the US Army. He retired as a Captain, serving in WWII, Korean and Vietnam Wars. He received many medals and citations including a Bronze Star. Prior to his time in the service, he worked as an upholsterer for Yale Upholstery in New Haven, and later went on to work for the Tudor House in Hamden. He also was employed by the Hamden Board of Education. He was a member of many military organizations, including the 77th Infantry Division, Baldwin, NY, the 307th INF Veterans Society, the Retired Officers Association in Alexandria, VA, a Life Member of the Chapter 2 DAV in New Haven and the National Assn. for Uniformed Services. Arthur's family would like to thank his caregivers at the Emeritus, Kathy and the nurses Joyce & Diane for the special care given to him in his time of need and the Vitas nurses. Funeral from BEECHER & BENNETT FUNERAL HOME, 2300 Whitney Ave, Hamden on Monday, at 8:15 AM with his Mass of Christian Burial to be celebrated at 9:00 AM in St. Rita Church, 1620 Whitney Ave. Entombment will follow in the St. Lawrence Garden Mausoleum, West Haven, Friends may also visit with his family at the funeral home on Sunday from 5:00 to 8:00 PM.