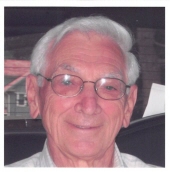 Athos “Art” Cattaruzza, age 92, of Hamden, husband to the late Estelle Massa Cattaruzza, passed away on November 23, 2017 at Connecticut Hospice, Branford. He was born on December 7, 1924 in Faraday, West Virginia to the late Flaminio and Elena Bombasei Cattaruzza. He is survived by his loving daughter Laurie DeFrancesco and her husband James of Hamden, his brother York Cattaruzza of North Haven, and grandsons Michael and Christopher DeFrancesco, as well as many nieces and nephews. Along with his wife Estelle he is predeceased by his brother Germano Cattaruzza and sister-in-law Lena Cattaruzza. After graduating from Lyman Hall High School in Wallingford, Art went on to faithfully serve his country as Sergeant in the U.S. Marine Corps during World War II . Upon discharge, he went on to earn a Degree from the Junior College of Commerce, the predecessor to Quinnipiac University. Most of his professional career was in sales having been employed by Bounocore Wines and McKesson Corp from where he ultimately retired. Well known in the community Art also owned and operated Maple Liquors in North Haven for many years. Additionally he built and operated a number of single use commercial properties mainly for lease by the USPS. Art was devoted to his family, especially his grandsons and never failed to show up to the many events in which they participated. He was a member of the Church of Our Lady of Mt Carmel in Hamden, the Knights of Columbus and the American Legion Post#76, Friends are invited to visit with Art’s family on Sunday November 26 from 6-8pm in the BEECHER & BENNETT FUNERAL HOME, 2300 Whitney Ave. Hamden. His funeral will leave the funeral home on Monday November 27 at 9:30am for a Mass of Christian Burial to be celebrated in Our Lady of Mt. Carmel Church at 10am. Interment with Military Honors to be held in All Saints Cemetery. In lieu of flowers, donations in Art’s name may be made to St. Ann’s Soup Kitchen, 930 Dixwell Ave. Hamden, CT 06514, or to CT Hospice, 100 Double Beach Rd. Branford, CT 06405.