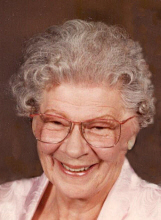 Ava A. Banks, age 94, of Hamden peacefully passed away on February 12, 2011 at Connecticut Hospice in Branford. Widow of the late John H. Banks she was the beloved mother of Rosemarie Banks Olsen of Guilford, John Allen Banks & his wife Jimmie Banks of Hamilton, Ohio and the late Margaret 'Peggy' Banks. Ava also leaves 2 grandchildren. Born in Aurora, NC on March 20, 1916 she was a daughter of the late Samuel & Effie Hudnell Allen. Ava served as Second Lieutenant in the US Army Nurse Corps during WWII and later retired as a school nurse for the Hamden Board of Education. At the request of her family there will be no Funeral Service or calling hours in Connecticut. A Private Graveside Service with Military Honors will be held at the Arlington National Cemetery when her interment takes place. Memorial contributions may be made to Conn. Hospice Inc. - 100 Double Beach Road, Branford, CT 06405. Arrangements are in care of BEECHER & BENNETT FUNERAL HOME, 2300 Whitney Ave, Hamden.