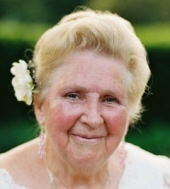 Barbara Ann Olson Larsen, of Hamden, passed away peacefully at home on June 20, 2015, with her family by her side. She was the loving wife for 52 years of her beloved late husband, Kristian Bernhardt Larsen, Jr. Barbara was born in North Haven on May 25, 1936, daughter of the late Harold E. and Anna Link Olson. She grew up in the Annex section of New Haven and was a 1954 graduate of Wilbur Cross High School. Until her recent illness, Barbara managed the food bank at Hamden's M.L. Keefe Center, where she had many friends, especially John Cabral, with whom she shared a birthday. Barbara was for many years the soloist at the 11 o'clock Mass at Hamden's Church of the Ascension, where she also prepared Holy Day luncheons. She also prepared numerous Easter sunrise service breakfasts for Dunbar United Church, where her husband Kris was a deacon. She was a longtime member of the Danish Sisterhood Lodge 153 and Haabet Lodge 32 of the Danish Brotherhood in America. She had been a member of the Ladies' Auxiliary of the Mix District Volunteer Fire Co, and performed at numerous MLK Day observances at Hamden's town hall. Barbara always enjoyed the company of her many friends at Tuesday night bingo at Hamden's Masonic Hall, and on the many trips to her favorite casinos. Affectionately known as 'Granny' to her son, Kris, and 'the sparkle lady' to everyone, Barbara had her hair done each week with a touch of glitter, a personal trademark that her kids, grandkids and their kids adored. The loving matriarch of a large and close-knit family, Barbara leaves a son, Kristian B. Larsen III of North Haven, daughters Gail (Victor) Mitchell and Karna Browning of Hamden, son-in-law David G. (Barbara) Johnson of Hamden, a foster son Jason (Lindsay) Falcone of Guilford, and 'honorary' daughter Jane Ciarleglio of Hamden. She was predeceased by her oldest daughter, Deborah Larsen Johnson. Barbara was blessed with nine grandchildren: Kristian (Molly) Johnson, Michael (Laura) Johnson, Matthew (Deanna) Johnson, Daniel (Emily) Johnson, VJ (Jessica) Mitchell, Andrea (Antonio) Maria, Jeffrey Browning, Jr., Jenniffer D. Browning and Anna Johnson. She was the proud great-grandmother of Ryan and Tyler Johnson, Haley Mitchell, Madison Johnson, Amelia Johnson and Christian Maria. Barbara is also survived by sisters Helen Burdick of Woodbury, Doris Olson of Plainville, and a brother, Albert Olson of Woodbury. Brother Edwin H. Olson and sister Louise Colella predeceased her. Friends may visit with her family from 4-8 PM on Tuesday, June 23 at BEECHER & BENNETT, 2300 Whitney Ave., Hamden. A Mass of Christian Burial will be held at 10 AM Wednesday, June 24, at Church of the Ascension. Interment will follow in Centerville Cemetery. In lieu of flowers, memorial donations in Barbara's name may be made to Haabet Lodge #32, c/o Barry Edmonds, 15 Taylor Dr., East Hampton, CT 06424. Barbara's family wishes to thank the staff of Smilow Cancer Center at Yale-NH Hospital and Connecticut Hospice Home Care, especially Tahirah, for the loving care she received during her final days.