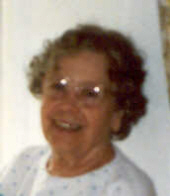 Barbara B. Olson, 96, was the wife of the late George H. Olson for 64 years. Formerly of Bedford Ave., Hamden, she passed away Sept, 24, 2007 in the Mary Wade Home of New Haven. Mrs. Olson was born in New Haven, December 17, 1910, daughter of the late Edward L. and Alice Thomson Best. Barbara had been a member of the Spring Glen Church, UCC since 1947. She was a former member of the High Lane Club. Bobbie, as she was known, was the loving mother of her daughter Beverly Harrison of North Haven, and her son George Best Olson of Seattle, WA, and a loving grandmother to Daryl Martin of Morris Plains, NJ. In addition to her husband she was predeceased by a twin sister, Beatrice Eliason, and a brother Edward Thomson Best. Funeral service will be Thursday Sept. 27 at the Spring Glen Church, Whitney Ave. at Glen Parkway, Hamden at 2:00 pm. Interment in Evergreen Cemetery will be private. Arrangements in care of BEECHER & BENNETT, 2300 WHITNEY AVE., HAMDEN. Contributions in her memory may be sent to the Mary Wade Home, 118 Clinton Ave., New Haven, CT 06513.