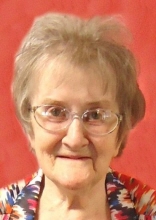 Barbara Collett, 85, formerly of Hamden and North Haven, CT and Woodford, VT, passed away after a long battle with Alzheimers Disease. She was predeceased by her husband of 55 years, Charles F. Collett, her parents, Soren and Barbara Frauenhofer Neidt, her brothers and their wives, Henry (Doris), Andrew (Rose), and William (Eleanor) Clock, and her grandson JD Collett. Barbara was the treasurer of the Woodford Snobusters snowmobiling organization and co-owner of the Twin Brook General Store and Motel, AKA 'Woodford Mall' in VT for many years. She was a long-time member of the North Haven Congregational Church and a Past Worthy Matron of Alice Chapter, Order of Eastern Star in Hamden. She enjoyed gardening, oil painting, making stained glass pieces, working crosswords and anagrams, and was widely known for her homemade fudge at Christmas time. Her home was always open and welcoming. For the past several years, Barbara was lovingly cared for by the staff of Water's Edge Center for Health and Rehabilitation in Middletown, CT. Her family is extremely grateful for the wonderful care, compassion, and respect shown her especially as she became more incapacitated. Barbara is survived by a large, loving, extended family of relatives and friends. Her children are Betty-Lou (Pat) in PA, Robert in VT, Sue-Ann Roy in CT, Edward (Mary Ellen) in CT, and John in VT. Grandchildren include Donald (Jamie) Hall, Wendy (Jerod) Civitello, Christopher (Christina) Collett, Nate Collett, Melissa Roy, Brooke, Bob, Christie, and Ashley. Great-grandchildren include Charlie and Donovan Hall, Jameson and Joseph Civitello, Tori, and Jaxson…no doubt more to come. Family and friends may call from 1:00-3:00 followed by a memorial service Sunday, April 2, 2017 at Beecher & Bennett, 2300 Whitney Ave., Hamden, CT. Burial will be private. In lieu of flowers, the family requests donations be made in Barbara's memory to the Alzheimer's Association/Connecticut Chapter at www.alz.org/ct.