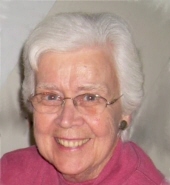 Barbara Coutts Staley, 76, of Cheshire, died on Tuesday, May, 12 2009 at MidState Medical Center after a short illness. She was the beloved wife of the late Atty. Thomas J. Staley. Mrs. Staley was born in New Haven on Dec. 23, 1932, the daughter of the late George F. Coutts and Esther Andrew Coutts. She was a direct descendent of the Rev. Samuel Andrew who served as President of both Harvard and Yale Universities. She graduated from Hamden High School and New Haven State Teachers College (later Southern Conn. State College) with a degree in Education. Mrs. Staley and her husband of 52 years resided in Cheshire all their married life. She was a teacher at Margaret O'Keefe Elementary School in Hamden and Norton Elementary School in Cheshire and more recently worked at the Cheshire Creative Craft Center. Mrs. Staley was first and foremost a devoted wife, mother, grandmother and great-grandmother. She supported her family's many activities by being room mother, den mother and cheering them from the stands or audience. She enjoyed spending time with her family and friends, gardening, feeding the birds, cross-stitching and was an avid reader. She was a member of the Cheshire Junior Women's Club, the Cheshire High School Boosters Club, and the Friends of the Cheshire Library, serving as Secretary from 2008 - present. Family and friends relied on her to be a constant source of compassion, love and understanding. She is survived by her children, Linda L'Ecuyer and her husband Peter of Merrimack, N.H., Sharon Richardson and her husband Terrence of Hopkinton, Mass., Beth Ann Staley of Unionville; her sons Thomas J. (Chip) Staley and his wife Amy of Hingham, Mass., and Peter Staley of Cheshire; her grandchildren, Timothy L'Ecuyer, Aimee and Michael Piccolo, Eric L'Ecuyer, Michael Richardson, Katherine Richardson, Thomas J. Staley III and Andrew Staley; her great-grandchildren Quinten, Isabella and Kaylee Piccolo, and her brother, George F. Coutts Jr. of Wallingford. Funeral from BEECHER & BENNETT FUNERAL HOME, 2300 Whitney Ave., Hamden, Saturday, May 16, 2009 at 11 a.m. followed by a Mass of Christian Burial at 12 noon in St. Bridget Church, Cheshire. Friends may visit with her family at the funeral home on Friday from 5 to 8 p.m. Interment will take place in Hillside Cemetery , Cheshire . In lieu of flowers the family asks that donations in her memory be made to the American Cancer Society, 538 Preston Ave., Meriden, CT 06450.