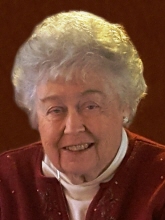 Barbara E. Doheny, age 86, of Hamden, passed away on October 23, 2017. Born in Hartford, CT on September 25, 1931, she was the daughter of the late William A. & Ruth (Smart) Elliott. Barbara is survived by her husband, William L. Doheny, Jr. DDS; her daughter Barbara M. Hamilton & her husband Jeffrey of Hamden; her son William L. Doheny, III of Wallingford; grandchildren, Caroline & Henry Hamilton and Allison & William Doheny IV; her former daughter in-law Kathleen Baughn of Hamden and her brother William D. Elliott of Virginia. Barbara received her 6th Year Degree in Education from Columbia University. She was a dental assistant and manager of her husband's dental practice for many years. Prior to that she was a art teacher at the University of Maryland and later at Amity Junior High School and was also employed at AAA Motor Club. She was a member of the New England Lacers, the International Old Lace Guild and was a former board member of the Hamden Historical Society. Funeral arrangements are in care of BEECHER & BENNETT FUNERAL HOME, 2300 Whitney Ave, Hamden. Services at a time and date to be announced. In lieu of flowers, contributions in Barbara’s memory may be made to West Rock Ridge Park Association, c/o Ted Lynn, 648 Mountain Road, Hamden, CT 06514.