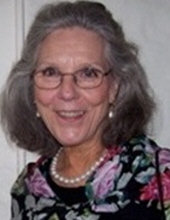 After a long and courageous struggle with dementia, Barbara Judith Tynan peacefully died on November 15, 2019 with her family by her side. Born in Paris, France on February 9, 1933 to the late Marjorie Dorsett and Raoul Henri Michault, Barbara was raised in Paris and Forest Hills, Queens, NY. In 1953, she married Daniel August Tynan of Manhattan. In 1966, Barbara and Dan moved from Forest Hills to Glen Rock, NJ where they raised their family. Barbara later moved to Mahwah, NJ. Barbara worked in clothing retail for more than two decades. She worked for Lord & Taylor, where she also modeled in their fashion shows, and for Brooks Brothers. Barbara and her family spent many wonderful summer vacations at the Jersey shore in Barnegat Light. She was very interested in the arts and culture and visited museums and attended theater in New York City. She had a magic touch creating a beautiful and welcoming home and was most happy around family and friends. Barbara was a loving and attentive grandmother, and her grandchildren brought her enormous joy. She made every effort to spend time with them and delighted in watching them grow up. Barbara is survived by her three children, Daniel Tynan of Fair Lawn, NJ; Lisa Tynan of Huntington, NY; and Allison Tynan Kravitz and her husband Dr. Richard Kravitz of Hamden, CT; and her grandchildren Sarah Tynan Kravitz and Michael Tynan Kravitz of Park City, Utah. Funeral Service will be held on Monday, November 18th at 11:00 a.m. in the West Side Presbyterian Church, 6 S. Monroe St., Ridgewood, NJ. Burial will follow in Wyckoff Reformed Church Cemetery. In lieu of flowers, please consider making a donation to the Alzheimer's Foundation.