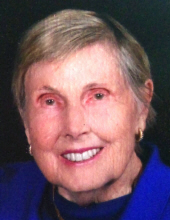 Barbara M. Roos, age 96, of Cheshire, passed away on March 22, 2019 at Elim Park. Barbara was born in New Haven on August 1, 1922, the daughter of the late F. Walden Wright and Gladys (Murfey) Wright. She was the widow of Oscar H. Roos. Barbara is survived by her daughter Christine R. Puffer and her husband Richard of Carlisle, MA; her sons Kenneth O. Roos and his wife Linda of Hamden and Richard W. Roos and his wife Cynthia of Branford; grandchildren Nathaniel and Katrina Puffer, Jessica Anastasio, Jason, Cassandra, Derrick, Corey, and Dakota Roos; and great-grandchildren Deirdre and Bridget Roos, Hunter and Gavin Anastasio, and Oscar and Josephine Puffer. She was a resident of Hamden for all her life before moving to Cheshire in 2004. Barbara was the secretary of the former Centerville Lumber Company, the family owned business for many years. She was a member of the Mt. Carmel Women's Club and a former Girl Scout Leader. Barbara was an active volunteer for years at her church, Bethesda Lutheran. Friends may attend her Funeral Service on Monday, March 25th at 10:00 a.m. at Bethesda Lutheran Church, 305 St. Ronan St., New Haven. Burial will follow in Centerville Cemetery, Hamden. In lieu of flowers, contributions in Barbara's memory may be made to the Bethesda Memorial Fund, Bethesda Lutheran Church, 305 St. Ronan St., New Haven, CT 06511. Arrangements are in care of Beecher & Bennett Funeral Home, 2300 Whitney Ave., Hamden.