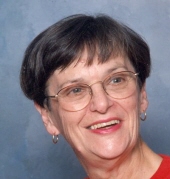 Barbara Mae Riefenstahl, 74, wife of the late Robert A. Riefenstahl passed away on Monday, July 23, 2007 at Westfield Care and Rehab in Meriden. She was born March 22, 1933 in Pittsburgh, PA a daughter of the late Raymond and Marguerite Mae (Antenen) Wilson. She worked as a secretary for various local companies. Barbara was a lifelong resident of Meriden, a member of Center Congregational Church where she played the bells for 30 years, was a member of the Mothers and Others Club and a deaconess. She was a devoted wife, mother and grandmother who will be deeply missed. Barbara is survived by three daughters and their husbands, Bonnie and Peter Chamberlain of Windham, VT, Debbie and Jonathan Shapiro of Berlin, Ct and Susan and Stuart Stack of Meriden, six grandchildren, Barbara and Samuel Chamberlain, Sarah and Marguerite Stack and Zachary and Carly Shapiro, one brother, Raymond Wilson of DesMoines Iowa, and three sisters, Audrey Buckner of Norwalk, CT, Carolyn Mountjoy of Lake Havasu, AZ and Judith Scouten of Yardley, PA A memorial service will be held on Friday, July 27 at 11:00am at Center Congregational Church, 474 Broad St., Meriden. The Rev. Dr. Robert W. Clarke will officiate. There will be no calling hours and burial will be at the convenience of the family. Memorial contributions in Barbara's memory may be made to Center Congregational Church, Remembrance Fund, 474 Broad St., Meriden, CT 06450. The Beecher & Bennett-Flatow Funeral Home, 48 Cook Ave., Meriden is in charge of the arrangements.