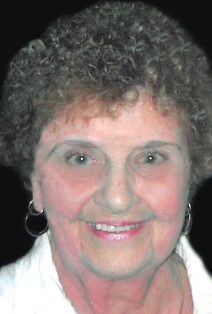 Barbara Neveski Sablitz, 89, of Wallingford, passed away April 16, 2021 after a brief illness. She was born in New Haven on April 6, 1932 to the late Adam and Alice Smith Neveski. For 65 wonderful years, Barbara was the wife of Leonard Sablitz until his death a year ago. Hamden was always home up until 10 years ago when Barbara and Leonard moved to Ashlar Village. She was a lifelong member of St. Peter’s on the Hill Church and then Grace & St. Peter’s Church, and also a member of the West Woods Volunteer Fire Dept. Women’s Auxiliary. For 13 years, Barbara enjoyed her time as a cafeteria cook for the Hamden Public Schools. She had a talent for sewing and was known for her canning every year using the produce from her large garden. Barbara was a devoted wife, mother, grandma, and GiGi. She will be missed by family and friends and especially her grandchildren, who were her pride and joy.
She is survived by a daughter, Lynn (Joseph) Roche of Wallingford; a son, Paul (Louise Marone) Sablitz of Cheshire; her grandchildren, Brian (Kristen) Roche, Sean (Kaitlin) Roche, Jennifer (Mark) Ritch, & Jaclyn Sablitz; her great-grandchildren; Sophia, William, Theodore & Logan Roche, Carter, Evan & Sydney Ritch, and Ashlinn & Luca Tufano; her brother, Harry Neveski of Hamden; a brother-in-law, Charles Smith of Wallingford; her former daughter-in-law, Jean (Dave) Sciarretto of NC, and several nieces and nephews.
Private arrangements are in care of BEECHER & BENNETT, 2300 Whitney Ave., Hamden. Memorial Contributions in Barbara’s name may be made to Grace and St. Peter’s Episcopal Church, 2927 Dixwell Ave, Hamden, CT 06518.