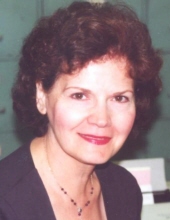 Barbara P. Wollenberg, 81, passed away at home on May 9, 2020 after a long, slow battle with Parkinson’s disease. She was the beloved wife of the late Raymond A. Wollenberg, Sr. for 46 years. Barbara was born in Meriden on December 9, 1938, daughter of the late Adolf E. and Nell D. (Kosienski) Piontek. She graduated from Meriden High School in 1956 and soon after met Ray, both working at Home Bank and they got married in 1958. As a young woman in 1958, she was honored to be chosen as a “Child of Mary” to crown the Blessed Virgin Mary statue at the May Crowning at St. Stanislaus Church, where she attended as a child. Barbara was a devoted Catholic woman who believed in God and family. She became a member of St. Joseph Church as an adult. Her first job was working the concession stand and the Capitol Theater, and she retired from Meriden Travel & Insurance as an insurance agent. Barbara enjoyed watching old movies and musicals on TCM and she loved singing and music. Barbara and Ray had great times at dances and parties with friends and family on Saturday nights throughout the ‘70s and ‘80s. She was proud of her Polish heritage and was a very good cook who had large Sunday meals for the family as well as church members after services. Barbara always loved her sibling’s families and also her many nieces, nephews and cousins.
Barbara is survived by her sons Raymond A. Wollenberg, Jr., of Bristol and Todd A. Wollenberg (Laurie), of Meriden; her daughter Ann W. Parrett (Tim), of Meriden; brother Al E. Piontek (Phyllisann), of Florida; and sisters Roberta Moncada (Robert), of New Hampshire, Cindy Beaulier (Dalton), of Florida, and Dolores Perrucci, of Meriden. Barbara was predeceased by her five day old son, Randy A. Wollenberg. She will be sadly missed by everyone in her life.
Barbara’s funeral services are private at this time. A memorial graveside service will be held at a later date. Beecher & Bennett-Flatow Funeral Home, Meriden is assisting with the arrangements. To share a condolence with Barbara’s family, please visit www.beecherandbennett.com.