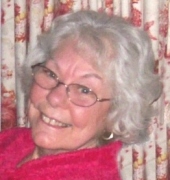 Barbara 'Patience' Poulin (Wood) left this world peacefully at her son and daughter-in-law's home in Wolcott, CT at the age of 84. Barbara is survived by her husband of 64 years, Joseph; son, Dave Poulin and his wife Michele; grandson, Tim; and sisters, Lee Richards and her husband Bob, and Mae Caron. She was predeceased by her parents and brother, Richard. Barbara was born on January 14, 1933 in Benton, ME to Ordell & Dorothy (King) Wood. She married Joseph on April 11, 1953. After moving to CT she settled in Middlebury and found employment at Timex. Barbara and Joseph welcomed their only child, David, into the world in December 1965. Over the years the family resided in the Southington, Bristol and New Britain areas and Barbara focused her career skills around the study, research and publishing of scripturally based material. Barbara was accomplished at knitting and sewing, making most of the clothes her family wore for many years. She loved music, played in the band 'The Ghostriders,' and was a teacher of guitar. She loved spending time on the coast of Maine, and walks along the Marginal Way in Ogunquit with her husband were special getaways. Typical evenings would find Barbara watching a favorite police drama on TV with a cat curled up nearby, unless it was the months leading up to March Madness, when Barbara was the UCONN Women's biggest cheerleader. Barbara and Joseph had a special place in their heart and home for certain younger people, adopting them as their own. She was a role model and mentor; and although she only had one son, many called her mom. Calling hours are scheduled for Sunday April 23, 2017 at New Life Church, 350 High Hill Road, Wallingford, CT from 5-7 p.m. with a Remembrance Service immediately following at 7 p.m. Pastor Will Marotti will officiate the ceremony. All are welcome to attend and celebrate Barbara's life. A time of fellowship with refreshments will follow. Burial will be private. The family would like to express their gratitude to Bristol Hospital Hospice for their compassion and care, as well as the members of New Life Church for their outpouring of love during this time. 'To every thing there is a season, and a time to every purpose under the heaven.' -Ecclesiastes 3:1