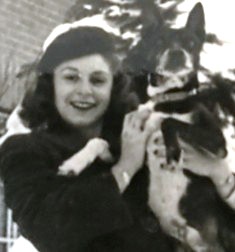 Barbara Lois Ostheimer Weiss died peacefully at the grand age of 101 on December 20, 2021 at the Whitney Center in Hamden. Born on Bastille Day in 1920 in Erie, Pennsylvania, the younger of 2 sisters, Barbara was an extremely talented pianist, performing on the radio as a child and gaining acceptance to the University of Michigan Music School, where she majored in music, specializing in piano performance. It was in Ann Arbor that she met the love of her life, a dental student named Lester B. Weiss (Les), a native of Naugatuck, CT. Barbara and Les were married in Erie on September 14, 1943; they then went off to Fort Bragg before Les went to the European theater as an Army dentist. Barbara lived in New York City for a time with her sister while Les was overseas. When Les returned, the two of them moved to New Haven briefly and then settled in Hamden, where Barbara lived the rest of her life.
Barbara and Les raised two children, Nancy Cohen, of Wayland, MA, and Roger Weiss of Newton, MA. She had 4 grandchildren: Robert Cohen, Matthew Cohen, Emily Weiss, and Alexander Weiss, and 9 great-grandchildren: Max, Tessa, Zach, Kylie, and Micah Cohen; Miles and Calvin Hainer; and Ethan and Ryder Weiss. Barbara devoted a great deal of time to Reading for the Blind and Dyslexic; she had a wonderful, dramatic reading voice, and was asked to supervise other readers. She also read stories to kindergarten students late in her life. She made tapes of her reading children’s stories, which were the surest recipe to help her grandchildren fall asleep.
Barbara loved music; she played the piano magnificently and with deep feeling. She played her grand piano daily in her 101st year, and she still had it; Chopin moved her most of all. One of her great gifts was to pass her love of music on through the generations. She also loved dogs, particularly Teddy as a child and Jo as an adult. She was well-known for taking daily long, vigorous walks around her Spring Glen neighborhood for many years, stopping to talk to and pet the dogs she encountered. But most of all she loved her family: her husband of 57 years before his passing in 2000; her kids, her grandkids, and her great-grandkids, all of whom returned that deep love.
A graveside service will be held at Beaverdale Memorial Park, Sec. L, on Monday, January 3 at 1:00 PM. Donations in Barbara’s honor can be made to Recording for the
Blind and Dyslexic at www.learningally.org. Due to Covid restrictions, a reception following the service will not be held.