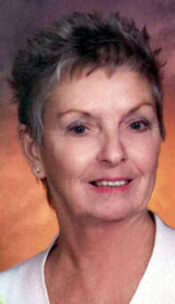 Beatrice “Bea” Ann Greenwood, 80, loving wife of 60 years to Evan W. Greenwood, passed away on September 24, 2022 at the Hospital of Central CT surrounded by her family. She was born in Meriden on December 22, 1941, a daughter of the late Walter Ryzoc and Mary Miller. Besides her husband Evan, she is survived by her children; Gregory Greenwood and his wife Tania, Douglas Greenwood, and Tracey Oberg and her husband Scott, sister Elaine Schuster, brother Donald Rice, grandchildren; Alexis and Matthew Greenwood, Krystalynn and Erica Oberg, and great-grandchild Lena Jankowski. She was predeceased by her son John Greenwood.
Bea attended Meriden High School until her junior year, and was a part of the first graduating class of Platt High School in 1959. She worked at International Silver in the stenopool for many years. She then took time off to raise a family and was a den mom to her boys. When she returned to the workforce, she worked for the Meriden Board of Education in the transportation department, then a paraprofessional, and finally ending her work years as a clerk in the Platt High School library.
She was a long-time devoted member of St. Andrew’s Episcopal Church in Meriden. She was involved in many church functions, such as altar guild, St. Andrew’s Day at the Meriden soup kitchen, and food pantry breakfasts.
She loved going on yearly family vacations to Cape Cod and traveling to Europe and other places with her husband Evan, especially to go skiing, which was more than just a hobby to them. Some of her best trips were to Lake Tahoe and San Anton, but her favorite was Stowe, Vermont. They went on many cruises and her favorite was Alaska. Later in life, she took up golfing and enjoyed hitting the links with family and friends, which brought many laughs and great memories. Above all else, she loved and enjoyed watching her grandchildren grow and spending time with her family; either planning and cooking family dinners or attending family dinners at her daughter’s house. She loved entertaining at home and was a stickler for having things just right.
The family would like to extend their deepest thanks and gratitude to Dr Lele and the oncology staff at Midstate Medical Center, and a heartfelt thanks to all the staff and caring personnel that supported her at Central CT Hospital.
A memorial service celebrating Bea’s life will be held on Saturday, October 1st at 11:00 a.m. in St. Andrew’s Episcopal Church, 20 Catlin St., Meriden, CT 06450. Memorial contributions in her name may be made to St. Andrew’s Episcopal Church.