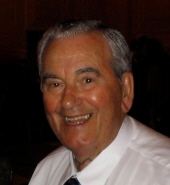 Bernard (Bernie, Ben) Philip Possidente, 91, of North Haven, CT, died peacefully on the morning of January 7. Born in New Haven, CT on Dec, 10, 1923, son of the late Carlo and Giuditta (Mancini) Possidente. His life centered around his large extended family, starting with his parents who emigrated from San Carlo, Italy, growing up with his ten siblings on Frank Street in New Haven, marrying Angeline Marcon and raising six children in North Haven, and becoming a beloved mentor to his 15 grandchildren, along with many more nieces, nephews, and in-laws; friends, and neighbors. Bernard graduated from Commercial High School in 1941 and served as a U. S. Army staff sergeant in Panama during World War II. After the war he worked at Eastern Machine Screw and Sargent's in New Haven, and then at Pratt & Whitney Aircraft in North Haven for 37 years. By 1958 he had earned three Associate Degrees in Manufacturing Engineering and Business from the University of New Haven. He was awarded an Honorary B.S. Degree from the University of New Haven in 2013. At Pratt and Whitney, Possidente started as a draftsman, became general foreman in manufacturing and engineering, and eventually the Chief Manufacturing Engineer for the European Consortium and Vice President for Strategic Manufacturing. He worked on commercial and military jet engines, helping develop and produce advanced turbine sections in jet engines for the SR-71 Blackbird spy plane and the F-15, F-16 and F/A-18 fighter jets. He also worked on the engine for the Surveyor spacecraft's moon landings in advance of the Apollo manned missions. Upon his retirement from P&W, he served for 10 years at Comtech Development Corp as Construction Program Manager. Bernie was an avid reader, swimmer and gardener. He loved spending summers with his family and friends at the Double Beach and Colony Beach Clubs, swims in the ocean, picnics and tennis. In retirement he spent many summers in Woods Hole on Cape Cod with all his children, their spouses and his grandchildren. He especially enjoyed listening to opera, playing harmonica, and sharing his famous 'Antipasto San Carlo' with family and friends for every holiday and special occasion. Bernard was pivotal in maintaining annual Fourth of July Possidente family reunion picnics for the past sixty-nine years, going back to 1946 when Guiditta Possidente began the tradition of celebrating family and patriotism when all of her sons returned safely from service in WWII. Bernie lent his leadership and wisdom to many professional and civic organizations including Chair of the American Society of Engineers, and received numerous Engineering awards. Bernard was a board member of the New Haven Food Pantry, and a member of St. Rita's Church in Hamden for 61 years, where he served on the building committee for the current church and was a lector for 40 years. He is survived by his devoted wife and love of his life for 61 years Angeline (Marcon) Possidente, children; Bernard Jr. (Deborah Recher) of Saratoga Springs, NY, Susan (Michael Good) of Durham, CT, Judy (David Kaufman) of Los Altos, CA, Karen (Richard Leibiger) of Durham, CT, Anne (Steven Santa-Maria) of Weston, CT, and Jan Possidente-Russo of Guilford, CT and by his grandchildren; Peter, Thomas and Maria Possidente; Jonathan and Rebecca Good; Jeffery, Rebecca and Alexandra Kaufman; Rachel and Emily Leibiger; Katie, Michael and Daniel Santa-Maria; Matthew Murchison and Richard Russo. He is also survived by brothers William of El Paso, TX, Alexander of Hamden, sisters Catherine DeLucia of New Haven, Jane Malinconico of Orange, Lucille Lamberti of North Haven, his dear brothers and sisters-in-law, and was predeceased by his brothers Marino and John and sisters Elvira Votto, Mary D'Angelo and Carmel Marciano. The family is most grateful for the loving care provided by Kevon, Pauline, and the wonderful staff of Masonicare and Hospice at Ashlar Village. Funeral from BEECHER & BENNETT, 2300 Whitney Ave., Hamden on Saturday, January 10, 2015 at 10 AM. A Mass of Christian Burial will be celebrated in St. Rita Church, 1620 Whitney Ave., Hamden at 10:30 AM. Friends may visit with his family Saturday morning from 8:30-10 at the funeral home. Interment with military honors will be at All Saints Cemetery. Donations may be made to Masonicare Home Health & Hospice, PO Box 70, Wallingford, CT 06492.