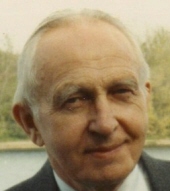 Bernard C. Wojan, 95, passed away peacefully as he wished at the Meriden home in which he grew up, on November 27, 2012. Ben was the oldest son of four children born to the late Julius and Augusta (Hoffman) Wojan, German immigrants from Russian territory. He was predeceased by his older sister, Dorothy Wojan, and two younger brothers, George and Robert Wojan. During WWII, he worked in the machine shop at Pratt & Whitney Aircraft. It was during that time he joined the Religious Society of Friends (Quakers) and became a conscientious objector to military service. Ben earned his Bachelor's Degree in Social Science at the Teacher's College of Connecticut, and his Master's Degree in Guidance at the University of Hartford. His first teaching job was at the Oak Hill School for the Blind, followed by eight years as a social worker in the State Division of Child Welfare. In 1951 he married the love of his life, Ruth M. Steenburgh, a great-great granddaughter of the American Revolution, and raised five children. Ruth predeceased him in 1983. After many years as a guidance counselor, industrial arts teacher and director of the cooperative work experience program for Bristol's school system, he retired in 1985. Ben had a lifelong commitment working for world peace and was a member of the FOR (Fellowship of Reconciliation). In 2010 he was the Green Party candidate for the 84th State House District. He also had a strong lifelong interest in alternative health regimens, and built a greenhouse at his home to grow wheatgrass, which he felt contributed greatly to his longevity. Ben had a strong interest in economics, especially the importance of limiting inflation, which, when uncontrolled, can have devastating effects on the economy. It was his hope that the public would cultivate an interest in government, and in exposing the widespread corruption and collusion that often takes place. He leaves two daughters; Martha and husband Jay of New Hartford, and Marilyn of West Hartford, and three sons; Mark of Los Angeles, CA, Alaric of Cromwell, and Timothy and wife Lila of Rockville, MD, as well as five adorable grandchildren; Robert and Alexandra of New Hartford, and Elise, Christian and Olivia of Rockville, MD. The family would like to thank his caregivers and MidState VNA & Hospice nurses and aides who allowed him to remain comfortably at home. Friends are invited to a Memorial Service at the Hartford Quaker Meeting House, 144 S. Quaker La., West Hartford, on Saturday, January 19th at 2 p.m. BEECHER & BENNETT- FLATOW FUNERAL HOME, 48 Cook Ave, Meriden is in care of arrangements. Donations in Ben's memory can be made to Hartford Monthly Meeting, Hartford Quaker Meeting House, 144 South Quaker Lane, West Hartford, CT 06119