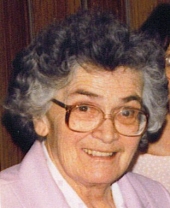 Bernice Claire Van Steenbergen Moore died on February 22, 2010, at the Masonic Home in Wallingford. She was born in New Haven on January 20, 1919, to the late Edward and Margaret Bohan Van Steenbergen. A life long resident of North Haven, she married the late William Joseph Moore on July 20, 1940. She was a member of Grace & St. Peters Church, the Eastern Star, and the Rebekahs. Bernice is survived by her children, Dorothy McQueeney and her husband Robert of Ocean View, DE; Margaret Wells and her husband Jeffrey of Littleton, NH; William Moore and his wife Patricia of North Haven; and Nancy Hunt and her husband Edward of Andover, MA. Also, she leaves 12 grandchildren, 8 great-grandchildren, and several nieces and nephews. She was predeceased by her siblings Dorothy Hermans and Edward Van Steenbergen. A Funeral Service will be held at BEECHER & BENNETT, 2300 Whitney Ave., Hamden, on Friday, February 26th at 10 a.m. followed by interment in Centerville Cemetery. Friends may visit with the family on Thursday evening from 6 to 8 p.m. at the funeral home.