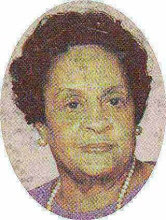 In Hamden, May 28, 2006, Bernice Thompson Stokes, 90, wife of the late Lee Stokes and the late Henry M. Brown, formerly of Sylvan Ave., New Haven. Mother of Kathryn Clarke of San Pablo, CA, Henry Brown of Phoenix, AZ, Robert Brown of Bedford, OH and the late David Brown. Also survived by 10 grandchildren and 7 great-grandchildren, cousin of Margaret Forbes of Florida and Aldena Bright of New Haven, several nieces and nephews and a host of friends. Dear Nanna to Elizabeth and Ted Weissberg of Chicago, IL. Bernice was born in New Haven on Sept. 3, 1915, a daughter of the late Edward and Elizabeth Tate Thompson. She was a member for over 73 years at St. Luke's Episcopal Church. At church, she was past President of the Episcopal Church Women's Guild for 10 years, a member of the Altar Guild and St. Ann's Guild. She always thanked her church family and dear friends who meant so much to her. God Bless each one! Till we meet again. Relatives and friends may call at St. Luke's Episcopal Church on Thurs., June 1 from 10 - 11 a.m. Service at 11 a.m. Interment in Beaverdale Memorial Park. Memorial contributions may be made to St. Luke's Episcopal Church, 111 Whalley Ave., New Haven, CT 06511. BEECHER & BENNETT-TAYLOR FUNERAL HOME, 410 Campbell Ave., West Haven in charge of arrangements.