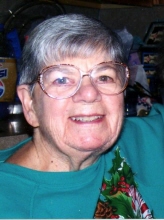 Meriden - Bertha A. Southland, 87 passed away on Sunday, July 26, 2009 at the Conn. Baptist Home. She was born May 16, 1922 in Meriden a daughter of the late Eugene and Hattiebelle (Holmes) Southland. She had worked as a bookkeeper for Gary Metal Products of Plantsville and retired from Meriden Welding Co. after 32 years. Bertha was a member of the former Main St. Baptist Church of Meriden She is survived by a sister, Emma Miarecki of Florida, and a nephew Keith Rancourt of Meriden as well as many more nieces and nephews. She was predeceased by five sisters, Marie Southland-Contois, Harriet Southland, Eleanor Rancourt, Clara Forline and Lilla Dixon and five brothers, Robert, Welcome, Clifton, Reginald and Gordon Southland. A Memorial Service will be held on Thursday, July 30, 2009 at 6:30pm in the Community Room at the Conn. Baptist Home, 292 Thorpe Ave., Meriden The Beecher and Bennett-Flatow Funeral Home, 48 Cook Ave., Meriden is in charge of the arrangements.