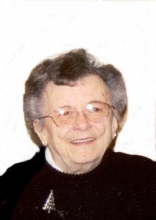 Clark, Betty Billings In Hamden, Dec. 16, 2008, Betty Billings Clark, 87, formerly of 18 Tower Lane, New Haven, wife of the late Edward H. Clark, mother of Judith Michaud and her husband Frank of New Haven and Edward H. Clark Jr. and his wife Linda of North Haven, sister of James Billings of Randolph, Iowa, grandmother of Mark Hofferberth, Kristin Pino, Kevin and Shawn Clark. Also survived by two great-granddaughters and another great-granddaughter is on the way. Betty was born in Chicago, IL, July 22, 1921 a daughter of the late William and Amy Prudy Billings. She had worked as a secretary at the former Culinary Institute in New Haven. Prior to moving to New Haven she had been a resident of West Haven and was a member of the First Congregational Church of West Haven. Funeral service Friday, Dec. 19 at 10:00 AM at BEECHER & BENNETT-TAYLOR. 410 CAMPBELL AVE., WEST HAVEN. Friends may call from 9-10:00 AM.