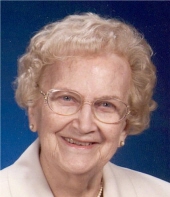 Betty (Jacobson) Henrickson, 89, of Cheshire, formerly of Northford, passed away peacefully on Tuesday, June 5, 2012 at Connecticut Hospice. Betty was the beloved wife for over 65 years of the late Ivar Henrickson Jr., who died in 2010. She was born in New Haven in 1922 to Ellen (Nilsson) and Adolf Jacobson. She graduated from Commercial High School in 1940 and attended secretarial school. She married Ivar in 1945, two weeks after he returned from the war in Europe, and after 65 years still thought of him as the gift of her life. She devoted her life to raising her family and was a volunteer in numerous organizations including the Totoket Historical Society, the PTA, Girl Scouts and Boy Scouts. She was a lifelong devout member of Bethesda Lutheran Church where she was active in the Altar Guild and served as chair for two terms. She was co-chair of the 100th Anniversary Dinner of Bethesda and was a member of the Doubles Club for its whole existence. After Ivar retired in 1985, they had the trip of a lifetime for 7 weeks to England, Scotland and Wales and also made several trips within the USA. She is survived by her children Karol Dow and her husband Alan of South Windsor, Kristen Weaver of New Britain, Ivar (Chip) Henrickson III of Westbrook and Peter Henrickson of Buford, GA; her grandchildren, Charles Wojack (Michelle), Karin Garrison (Kevin) and Amanda Cardot (Bobby); her great-grandchildren, Kohl, Karina, Angelina, Madeline, Nicholas, Jayson and Lucas; her sister Ruth Starbranch of Cromwell and numerous nieces and nephews. In addition to her husband, she was pre-deceased by her sister Ellen Cecelia Johnson and her son-in-law Rev. Elon Weaver. Betty was a loving mother, loyal friend and a cheerful presence in the lives of everyone close to her and will be greatly missed by all who knew her. Per her request, there will be no calling hours. A memorial service will be held on Sunday, June 10, 2012 at 4:00 PM at Bethesda Lutheran Church. Burial will be private. In lieu of flowers, the family requests donations to Bethesda Lutheran Church, 305 St. Ronan Street, New Haven, CT 06511. Arrangements are in care of BEECHER & BENNETT, 2300 Whitney Ave., Hamden.