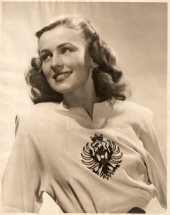 Betty Ruth (Moore) McKernan of Hamden, passed peacefully on December 5, 2015 three weeks short of her 90th birthday. She was born December 31, 1925 in Buffalo, NY to the late Clarence Milton and Cora (Speck) Moore, and always enjoyed that the world celebrated her birthday every New Year's Eve. During her younger years, Betty's family moved often as her father traveled to where the work was. Her stories of the massive snow drifts in Buffalo, the fun times at Forest Park while living in Worchester, MA, or her love for Summit, NJ were cherished by her family. After a time working for Bell Laboratories in NJ, Betty attended Bucknell University in Lewisburg PA, where she met Bob McKernan during a college production of Ten Little Indians. Betty interrupted her college career to get married and raise three sons. Years later, she earned her BA degree from Drew University. Betty never lost her love of theater and of language, appearing in Community Theater productions in New Jersey and Connecticut. She worked as a copywriter for local radio stations including WELI, WDRC, and WAVZ. She was also a researcher and scriptwriter for a company that produced audio tours for attractions like Lincoln's New Salem and San Francisco's Fisherman's Wharf. For a time, she was even a TV personality, delivering the weather for New Haven's WNHC TV. Betty was an avid gardener who enjoyed growing beautiful flowers but really preferred raising plants that could be harvested and eaten. She loved to fish and was very adept at turning wild game brought to her by a friend into delicious meals. She was an extremely creative woman who was often found at her typewriter banging out scripts for Cub Scout shows or school events, directing theater productions for the Dunbar Hill Congregational Church Youth Fellowship, or up to her elbows in her 'clay pits' creating all sorts of useful and artistic ceramic treasures. Betty is survived by her three sons: Robert (Catherine Dufton), Rory (Susan Kalita), and Malcolm; her three grandchildren: Katie, Michael, Christen; and her six great grandchildren: Brianna, Caitlyn, Michael, Alexis, Brayden, and Kalirose. Funeral arrangements are private in the care of BEECHER & BENNETT FUNERAL HOME, 2300 Whitney Ave, Hamden, CT. Donations in Betty's memory may be made to Connecticut Hospice Inc, 100 Double Beach Rd, Branford, CT 06405 or to the National Multiple Sclerosis Society, 659 Tower Ave, 1st FL, Hartford, CT 06112.