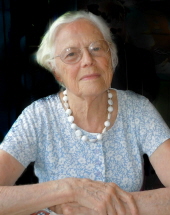 Long time Hamden resident, Betty Veith Anderson Miller, 91, passed away on November 9, 2014. She was born on March 19, 1923 and was the daughter of the late Rudolph and Gladys Roberts Veith. She moved to rural Hamden as a young child, attended the old Centerville School and graduated from Hamden High School in 1941. One of Betty's most vivid memories was the long country walks she enjoyed with her father and it was at the beginning of one of these walks that the news of Pearl Harbor reached them. She met her late husband, photographer Robert Anderson, on a blind date and they married in 1946. Together they raised four children, Kathryn (James) Smerekanych of Hamden, James Anderson of Hamden, and Leslie Hardin of Scott's Hill, TN. She was predeceased by a daughter, Cynthia Lynn Anderson, son-in-law Eddie Hardin, and her brother, Robert Veith. Betty and the family traveled extensively, pulling a camper from Maine to Michigan, and spent many summer weekends at Meig's Point soaking up the sun and sailing around Long Island Sound with Bob in his tiny sailboat. Later, she traveled through Europe with close friends, and enjoyed England and Scotland with her second husband, the late John Miller, with whom she criss-crossed America on many vacations. Betty was an active member of Christ Lutheran Church for over forty-five years, singing in the choir and participating with Lutheran Church Women. She was a member of the Lady Fenwick Chapter of the Daughters of the American Revolution, a member of the Scandinavian Women's Chorus of Connecticut, The Silk and Sounds and Swedish Singers. After retiring from the former Bank of Boston, she attended both Southern Connecticut State University and Albertus Magnus College, studying Music, literature and history. Besides her children, those left behind to cherish her memory are her eleven precious grandchildren; Michelle (Michael) Klemenz, Cheryl (Michael) Seaman, Steven (Christina) Rubano, Robert (Emily) Kelly, Jennifer (Jason), Clendenion, Alexandra (Glenn) Carrington, Hilary (Kenneth) O'Conner, Megan (Matthew) Holmes, Peter Kelly, Jacob Shaver and Sandra Shaver Hamm, and seventeen great Grandchildren, including one on the way. Betty also leaves behind step-sons, John (Christine) Miller of Oxford and Gregory Miller of Meriden; step-grandchildren Paula, Gregory, Amanda, Justin and Steven; brother-in-law, Fred Miller of Hamden and sister-in-law Lillian (Gerry) Lundy of Carol Stream, IL, a niece, three nephews and her grand-dogs, Sarah, Gypsy, & Vixen, whose lives she was instrumental in saving. Many thanks to the staff of Hamden Health Care for their dedication and service over the course of her long illness. You were her angels. Friends may visit with Betty's family on Thursday, November 13th from 4:00 to 8:00 p.m. at BEECHER & BENNETT, 2300 Whitney Ave, Hamden and may attend her Funeral Service to be celebrated on Friday morning at 10:00 a.m. in Christ Lutheran Church, 600 Shepard Ave, Hamden. Burial will follow in Beaverdale Memorial Park. In lieu of flowers contributions in Betty's name may be sent to the Alzheimer's Association, P.O. Box 96011, Washington, DC 20090 or The Connecticut Humane Society, 70 Russell Rd, Newington, CT 06111.