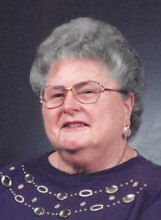 Beverly Jane Hasbrouck, 85, of Wallingford, beloved wife of 64 years to Donald H. Hasbrouck passed away on January 25, 2015 at Masonic Hospital in Wallingford. She was born January 26, 1930 to the late John and Mary Bryan Searle. Beside her husband, she is survived by her four daughters, Linda Ruggiero of West Haven, Carol (Donald) Forand of Wallingford, Mary Hasbrouck of Middletown and Vicki (Russell) Arpin of Cheshire, as well as her brother-in-law, Thad Hasbrouck and son-in-law Ken Ruggiero. Beverly was a beloved and proud grandmother to Kristine (Marc) D'Andrea, Melissa Ruggiero (MJ Ingram), Kimberly (John) DeLuca, Kenny Ruggiero, Rebecca (David) Flyntz, Nicole (Michael) Petersen and Tyler Arpin (Stephanie Miller). She was also 'GiGi' to her five great-grandchildren: Aubrey and John DeLuca, Colton D'Andrea, Kaitlyn and Joshua Flyntz. Bev grew up in Hamden and is a graduate of Simmons College. After living in Hamden 58 years, Bev and her husband retired to Woodsville, New Hampshire, where they enjoyed many years of lakeside tranquility before returning to Wallingford to be closer to their ever-growing family. Bev especially loved spending time with her grandchildren and great grandchildren and was an avid crafter. She had a passion for sewing and quilting, making beautiful, treasured pieces for family and friends. Her love of all things Disney, especially Mickey and Minnie Mouse, brought the entire family together for a 50th anniversary trip to Disney World, a memory all involved will always cherish. She was a member of the United Methodist Women and is fondly remembered by the North Haverhill Methodist Women. She is a member of Ashlar Village #116 O.E.S. and Past Matron of Alice Chapter #76 O.E.S. Beverly's family would like to thank all the staff at Masonic; Ashlar Village, the Hearth, Homecare, Hospital and Hospice who took wonderful care of her. Friends are invited to attend her memorial service on Feb. 14th at 2:00 PM in the Knapp Auditorium located in Bridgehouse at Masonicare at Ashlar Village in Wallingford. In lieu of flowers, memorial contributions can be made to the Masonic Charity Foundation, P.O. Box 70, Wallingford, CT, 06492 or the Yalesville Methodist Church, 8 New Place Street, Wallingford, CT, 06492.