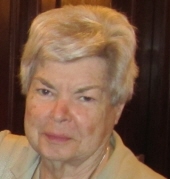 Beverly Sawin Davie, 85, of Wallingford passed away on March 17, 2016 at Masonicare. Wife of the late John 'Ian' Davie of 57 years , Bev was born in New Haven to the late Raymond R. and Inez (Mossberg) Sawin. Granddaughter of the late Ernest and Minnie Raycroft Sawin and Oscar and Alida Peterson Mossberg, she graduated from Hillhouse High School, New Haven and then Stephen College, Columbia, MO. Bev married John 'Ian', son of the late Thomas and Margaret (Stockman) Davie on September 15, 1951 at her parent's home in New Haven. He was the beloved man of her dreams, who died on March 12, 2008 after a long illness. Bev was a loving wife, mother, grandmother, and sister. She is survived by her sons, John E. Davie and his wife Khong R., Raymond S. Davie and his wife Wendy R. and Thomas Davie and his wife Stacey C.; her grandchildren Amelia Davie and Luis Rodas, Bryan Davie, Lauren and her husband Jeff Tranquist, and Jessica Davie and James Belin Jr.; her sister, Aldryth S. Bedner; and many cousins, nieces and nephews. She was predeceased by her sister, Laverne S. Lieberum. Bev loved traveling with her husband to England and Scotland, and Hawaii and Japan. She loved boating and fishing on Long Island Sound and beyond with her family. Bev was a member of the Mayflower Society, the CT Society of Genealogists, two Bible study groups, a volunteer at Bethany Historical Society for many years and past chairman of the New Haven Celiac Group. She contributed her time at the Bethany Senior Center and volunteered at Ashlar Village while she lived there Relatives and friends are invited to attend a celebration of Bev's life on Monday, March 28, 2016 at 10:00 a.m. in Auditorium C at Ashlar Village, Wallingford, with Rev. Dave Abbott officiating. Interment in Beaverdale Memorial Park will be private. Memorial donations in Bev's memory may be made to the Shriner's Hospital for Children, Office of Development, 2900 Rocky Point Dr., Tampa, FL 33607 or The Masonicare Annual Appeal, c/o The Masonic Charity Foundation of Connecticut, P.O. Box 70, Wallingford, CT 06492 or a donation of your choice.