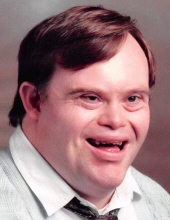 Bradford Stevens, 62, of Hamden, passed away on December 2, 2019 at Connecticut Hospice. He was born in New Haven on February 20, 1957 to the late Edger and Myrtle Bodwell. Brad was a longtime resident of H.A.R.T.'s Victory House group home, where he was truly loved and respected by multi-generational caregivers. He was a gentle, soft spoken man of few words, but whose voice would amplify in joyous song and infectious laughter. Brad loved celebrations of all kinds, especially holidays and birthdays. He enjoyed music and was an avid fan of oldies, the Beatles, and all renditions of The Star Spangled Banner. In younger days, Brad was a Special Olympian, always embracing the Olympic experiences of community and pageantry. He is survived by his longtime guardians, Robert and Rosemary Howell, and was a treasured part of their family. He also leaves his entire Victory House family, with special thanks to Mr. Terry King and Ms. Sharae Clark for being there to share his joy and help him through challenging moments. All of those whose life paths intersected with Brad's would agree that 'to know him was to love him.' Friends are invited to visit at BEECHER & BENNETT FUNERAL HOME, 2300 Whitney Ave., Hamden from 3:00 to 6:00 p.m. on Wednesday, December 4th followed by his Funeral Service at 6:00 p.m. in the funeral home. In lieu of flowers contributions in Brad's memory may be sent to H.A.R.T. United, 72 Washington Ave., North Haven, CT 06473.