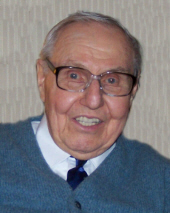 Branislav 'Bernie' Peter Kapitan, 90, husband of the late Mimi Widmer Kapitan, passed away on June 5, 2015 after a short illness. He was born in New Haven on October 6, 1924 to the late Peter and Anna (Sintay) Kapitan. Bernie will be remembered by his daughters, Linda Kapitan and her husband, Darryl Johnson of East Berlin and Karen Kuder and her husband, Joseph of Moorestown, NJ; grandchildren, Jessica and Joseph Kuder of Moorestown, NJ, Shelby, Brandon, and Melissa Johnson of East Berlin. He was predeceased by his sister, Lillian Mangs. Bernie grew up in New Haven. He moved to Hamden where he lived for over 41 years before relocating to Cheshire. He was a proud Army Air Corp Veteran having flown 35 missions as a radio operator/gunner in WWII. For 30 years he was a maintenance machinist in the steel industry. After his retirement, Bernie taught Industrial Arts in the Fairfield School District for over 20 years and finished his working career at Winchester Fire Arms. He was a founding member of the 'T' Club, spending time with his friends for over 70 years. He enjoyed singing, traveling and golfing. Bernie was a volunteer at St. Ann's Soup Kitchen and the Shubert Theater. He was also an active member of his church, the Lutheran Church of the Good Shepherd in Hamden, CT. Friends are invited to join Bernie's family for a Memorial Service to Celebrate his Life, on Saturday, June 13th at 11:00 a.m. at the Lutheran Church of the Good Shepherd. BEECHER & BENNETT, 2300 Whitney Ave Hamden are in care of arrangements. In lieu of flowers, contributions in Bernie's memory may be sent to Lutheran Church of the Good Shepherd, 3680 Whitney Ave, Hamden, CT 06518.