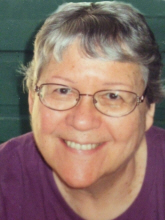 Meriden- Brenda F. Chapman died of complications from Parkinson's Disease on November 16, 2014 at home surrounded by her closest relatives. Born on October 15, 1939 in Mineola, NY, she was the daughter of the late Samuel and Dorothea (Rose) Fleet. Mrs. Chapman was a Phi Beta Kappa graduate of the University of Rochester, majoring in psychology. She was employed for 30 years in several clerical positions by the City of Meriden, at the Meriden Public Library, the Tax Collector's office and at the time of her retirement, the Guidance Office of Maloney High School. Mrs. Chapman was a member of Center Congregational Church and was involved in all aspects of their music program, including many years of singing in the Sanctuary Choir. For 9 years she was a member of the Cheshire Consort, an early music performance ensemble. She also participated in area choral groups, including the Greater Meriden Oratorio Chorus and the Wallingford Chamber Singers. Mrs. Chapman is survived by her husband of 54 years, James Davis Chapman and by three sons, Davis Chapman Hawkowl (Jana Lussier) of Amherst, MA, Daniel Chapman (Melissa Salyer) of Piney Flats, TN and Timothy Chapman of Endwell, NY. She leaves behind four delightful grandchildren, Allison and Michelle Chapman, Jesse Chapman and Galen Hawkowl. She is also survived by two sisters Gretchen and Judith Fleet and by a niece, Aari Zagarella. A Memorial Service will be held at Center Congregational Church, 474 Broad St., Meriden on Thursday November 20, at 9:30 A.M. Burial at the convenience of the family will be at the Memorial Cemetery of St. John's Church, Cold Spring Harbor, LI, NY. Relatives and friends may call at the Beecher & Bennett-Flatow Funeral Home, 48 Cook Ave., Meriden on Wednesday from 5-8pm. In lieu of flowers, donations in Mrs. Chapman's memory may be made to Center Congregational Church Organ Repair Fund, 474 Broad St., Meriden, CT 06450, or to the Institute for Neurodegenerative Disorders, 60 Temple St., Suite 8B, New Haven, CT 06510.