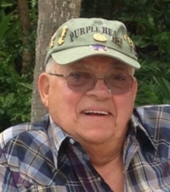 Bruce W. Farnsworth, Sr, Sgt. First Class US Army Ret., age 71, of South Meriden, passed away on August 25, 2015 in the loving arms of his wife. Born in Meriden on September 14, 1943 the son of the late Ernest Farnsworth & Avis Durgan Farnsworth. Bruce is survived by his wife of 48 years, Cheryl Godwin Farnsworth; his son Bruce W. 'BJ' Farnsworth Jr, of Meriden; his daughter Tammy Lee Alcutt of Southington; daughter in-law Candie Farnsworth; son in-law Tim Alcutt; grandchildren Randi Alcutt, Samantha Farnsworth, Buddy Alcutt, Andrew Farnsworth, Joshua Farnsworth, Jesse Alcutt & Maggi Alcutt and his great granddaughter Andi Marie Alcutt. He was predeceased by his sister Carol Richert. Sgt. Farnsworth served his country in Vietnam, after which he served over 35 years in the Army National Guard. Among his many medals he was a recipient of 5 Purple Hearts and a Silver Star with Valor. Bruce was a lifetime member of the 25th Infantry Division Association, the DAV, the VFW, the American Legion and Order of The Purple Heart. Bruce was also employed for over 33 years at Wallingford Steel (Allegheny Ludlum). Friends may visit with his family at BEECHER & BENNETT - FLATOW Funeral Home, 48 Cook Ave, Meriden on Sunday evening from 7:00 to 9:00 PM, and may attend his Funeral Service on Monday at 11:00 AM at New Life Church, 350 High Hill Road, Wallingford. A military burial will follow at Walnut Grove Cemetery, Meriden. In lieu of flowers, contributions in his memory may be made to Wounded Warrior Project, P.O. Box 758517, Topeka, KS 66675.