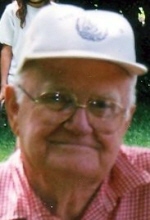 MERIDEN - Carl Arvid Carlberg, husband of the late Fern L. Lawrence Carlberg, passed away peacefully on Friday, March, 7, 2008. Carl was a lifetime resident of Meriden, born October 6, 1916, son of Carl B. and Augusta (Anderson) Carlberg. Carl was predeceased by his wife and brother, Bertil Carlberg. He was a graduate of Meriden High School, Class of 1935, was known as Swede by his friends and employed by New Departure in Meriden and Bristol for 35 years, retiring in 1972. During his retirement he enjoyed spending time with his wife, his garden, golfing, fishing and watching his favorite sports teams, Red Sox and New York Giants. Carl was of a strong Lutheran faith and a lifetime member of Immanuel Lutheran Church. Because of his proud Swedish heritage, he was a member of the VASA Order of American Norden Number 1 of Hartford for 66 years, the Swedish Svea Social Club of Kensington for 55 years and the Meriden Senior Center. He was also a member of UAW 987 and a lifetime member of F.O.E. Eagles. Carl is survived by a son, Fred Wayne and his wife, Lorna, four grandchildren and ten great-grandchildren, most living in California; many nephews, nieces and cousins, both in the United States and Sweden; and a special friend and caregiver, Donna J. Watson of Middletown and his many, many friends old and new. Funeral services will be held Monday, March 10, at 11:30 am at the Beecher and Bennett Flatow Funeral Home, 48 Cook Ave., Meriden. The Rev. Perry L. Beaver will officiate. Burial will be private. Relatives and friends may call from 10 to 11:30 a.m. prior to the service. In lieu of flowers, memorial contributions may be made to the Immanuel Lutheran Church, l64 Hanover St., Meriden, CT 06451, or to the American Lung Association of CT, 45 Ash St., East Hartford, CT 06108.