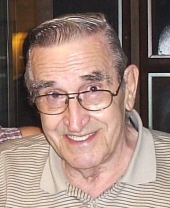 Carl 'Buddy' Benson, 83, of New Haven, passed away on October 20, 2011 at the West Haven VA Hospital. Born in West Haven on October 26, 1927 to the late Carl and Daisy Dupee Benson. Carl is survived by his loving wife Dorothy Benson of New Haven; sons, Carl Benson of Clinton and Greg Benson of Branford; daughters, Beth Sousa of Wallingford, Carol Santiago of Florida, and Peggy Miller of Hamden; He has ten grandchildren and a great grandson. Carl proudly served his country during WWII as a member of the Merchant Marines and the U.S. Marine Corps. He also served as Commander of the Marine Corps League in Meriden. For 35 years Carl worked throughout the greater New Haven area as a 'breadman' for Wonder Bread. Friends may visit with the family on Monday, October 24th from 5-8 p.m. at BEECHER & BENNETT Funeral Home, 2300 Whitney Ave, Hamden. The funeral procession will leave the funeral home on Tuesday morning at 9:30 a.m. to celebrate a Mass of Christian Burial at Blessed Sacrament Church at 10 a.m. Burial with Military Honors will take place in the Swedish Cemetery in Portland. In acknowledgement of the great care they provided, contributions in Carl's memory may be sent to: Department of Veterans' Affairs 287 West St. Rocky Hill, CT 06067.