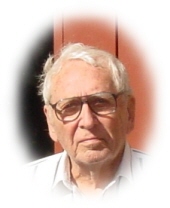 North Branford- Carl Norman Hansen, 88 husband of Emilie Neumann Hansen for 61 years, passed away on Friday, Nov. 11 at Yale-New Haven Hospital. He was born Dec. 20, 1916 in New Haven a son of the late Hans and Margaret (Wright) Hansen and was a longtime resident of Orange, CT. He served his country during World War II in the U.S.Coast Guard. He received his bachelor's degree from Quinnipiac University in 1952 and Masters of Divinity degree from Yale University in 1981. He retired from Southern New England Telephone as Executive Vice President after 42 years of service. Mr. Hansen was very active at Quinnipiac University, he was a member of the Board of Trustees from 1940-1998 when he was elected to trustee Emeritus which he held until his death. He was Chairman of the Board of Trustees serving on almost all committees in almost all capacities, served as interim president from 1986-1987, was a parent of a Quinnipiac University Graduate and received and Honorary Degree of Doctor of Humane Letters in 1981. For his dedication to the university in 1984 the Alumni Committee started a scholarship fund in his name and named the Student Center in his honor, the Carl Hansen Student Center. After Mr. Hansen and his wife graduated from Yale University Divinity School together they worked with the Lutheran Church throughout New England. He was a member of Bethesda Lutheran Church, was past president of the New Haven Chapter of the American Red Cross, active in the Telephone Pioneers of America, served as Chairman for the Governor's Council on Education, Division Chair for the United Fund, Chairman for CHCP (Community Health & Care Plan), Director for the former Connecticut Bank & Trust and Director for Rogers Corp. Besides his wife he is survived by two sons Ranald D. Hansen of Lake Orion, MI and Roderick P. Hansen of Boca Raton, FL a foster son, Shams Bhaloo of Vancouver, a sister, Bernice H. Shepard of West Hartford, CT , four grandchildren and one great-grandchild. A memorial service followed by a luncheon reception will be held on Wednesday, Nov. 16, 2005 at 11:00 a.m. at Bethesda Lutheran Church, 305 St. Ronan St., New Haven. Contributions in Mr. Hansen's memory may be made to The Carl N. Hansen Endowed Scholarship Fund at Quinnipiac University, Development Office, 275 Mt. Carmel Ave., Hamden, CT 06518 or to Bethesda Lutheran Church, 305 St. Ronan St., New Haven, CT 06511.