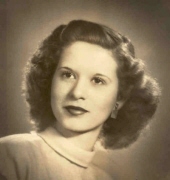 Carmel Parillo Boyd, 80 passed away peacefully on Tuesday, February 28 at St. Francis Hospital. She was born in New Haven on October 20, 1925, daughter of the late Domenic Parillo and Jennie Voccio. Known as "Candy" to friends and family, she grew up on Humphrey Street in New Haven, later moving to Whitney Avenue, then Hamden. She was a resident of Pilgrim's Harbor in Wallingford for the past 34 years, where she enjoyed golfing, sunbathing and all things Italian. While caring for her mother and daughter, she spent many years working in marketing for non-profit organizations such as the American Cancer Society, Leukemia Society, and the American Heart Association. She is survived by her daughter Jennifer Boyd of West Hartford and husband Jonathan Olson, two grandchildren Milo and Mia, brothers Joseph Pari of Hamden and Andrew Parillo of North Haven, and numerous nieces and nephews. She was predeceased by her sisters Mary Polverari and Rose Austin, and brothers William and Louis Parillo. Funeral from BEECHER & BENNETT, 2300 Whitney Ave., Hamden, Sat., March 4, 2006 at 9:30 a.m. Mass of Christian burial will be celebrated in St. Rita Church at 10 a.m. Relatives and friends are invited to call on Friday from 5 to 8 PM. Interment in St. Lawrence Cemtery. Contributions in her memory may be made to Macular Degeneration Foundation, Inc., Research Fund, P.O. Box 531313, Henderson, NV 89053.