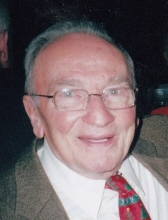 Carmen L. Siniscalchi, age 86, of Hamden, passed away on March 29, 2013. Born in New Haven on Feb. 12, 1927 he was the son of the late Lorenzo & Mary Alfano Siniscalchi. Carmen is survived by his wife of 59 years, Marie Tiberio Siniscalchi; his daughter, Joanne Pacelli & her husband Steven of Hamden; his sons, James L. Siniscalchi & his wife Dorothy of Wallingford and Thomas J. Siniscalchi of Hamden; his grandchildren Meredith & Gregory Pacelli; his sister, Marian Serphillips & her husband Joseph of West Haven; his sister in-law Marie Tiberio and several nieces & nephews. After High School graduation in 1944 Carmen enlisted in the U. S. Navy Seabees at the age of 17, he proudly served in the Asiatic - Pacific on the Saipan & Tinian Islands. He was awarded 4 Medals & 5 Ribbons for his service. Carmen was a life member of the AMVETS Post #9 since 1954 and has served as it's Commander as well other offices within the Post and in the AMVETS Dept. of CT in various positions. He was awarded the Coveted 'White Clover' Award in 1965 & the AMVET of the Year in 1970. Carmen also volunteered at the West Haven Veterans Hospital for hundreds of hours and was very involved for all Veterans. He was employed at Pratt-Whitney in East Hartford as an Experimental Sheet Metal Worker for over 37 years before his retirement. He liked to read, walk, dance to Big Band music as well as travel, casino trips, playing cards and especially watching his cherished grandchildren play sports. Carmen was an avid NY Giants fan, Red Sox and UCONN Womens Basketball fan. Carmen's family would also like to thank all the Staff at the Smilow Hospital for their care that he recieved in his time of need. Friends may visit with his family on Tuesday from 4:00 to 8:00 PM at BEECHER & BENNETT FUNERAL HOME, 2300 Whitney Ave, Hamden and may attend his Funeral on Wednesday, leaving the funeral home at 9:15 AM for his Mass of Christian Burial at 10:00 AM in the Church of the Blessed Sacrament, 321 Circular Ave, Hamden. Interment with Military Honors will follow in All Saints Cemetery, North Haven. Contributions in his memory may be made to the Smilow Hospital at Yale New Haven, 20 York St, New Haven, CT 06510 or to the Blessed Sacrament Church, 321 Circular Ave, Hamden, CT 06514.