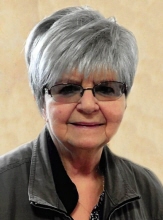 Carol F. Hughes, age 74, of Hamden, passed away surrounded by her family on October 22, 2017. Carol was born in New Haven on March 24, 1943, a daughter of the late John Joseph Hughes & Helen Margaret (Laffin) Hughes. She is survived by her sons, John & Joseph Franchi, both of East Haven; her daughters, Laurene (Joseph) Ortowski of Hamden, Carol (Rudolph) Franchi-Torre of East Haven, and Mimi Franchi of Madison, and 9 grandchildren. Carol was predeceased her sisters, Helen H. Gilmore & Dorothy H. McCarthy, and her brother, Sgt. John Hughes Jr., U.S.M.C. Carol was a former employee of Birth Rite and the Children Center. She was an Alcohol & Drug Counselor at the Shirley Frank Foundation and ended her career as a Resident Associate at the Mary Wade Home in New Haven. She was a member of Defenders of Wildlife and was an avid sports fan; favorite teams included the Minnesota Vikings, Boston Red Sox, Cleveland Cavaliers, Florida Gators, Georgia Bulldogs and Notre Dame. Carol wanted to thank the teams of caregivers that guided her through this journey of hers. They include Dr. Diane Defusco, Dr. Christine Knowlton, Lisa Hoffer APRN, & Eileen Holt RN of Yale Radiation Oncology; Dr. Thomas Fynan, Francine Jaworowicz RN of Yale Oncology; Dr. Joseph Saracco; Lois Kasarayskas RN, and the Connecticut Hospice Team. Friends may visit with her family at St. Stephen's Church, 400 Ridge Rd, Hamden, on Thursday, Oct. 26th from 9:30 AM and may stay to attend her Mass of Christian Burial, to be celebrated at 10:00 AM. Interment will be private. In lieu of flowers contributions in her memory may be made to The Mary Wade Cheer Fund, In Memory of Carol Hughes, 118 Clinton Ave., New Haven, CT 06513. Arrangements are in care of Beecher & Bennett Funeral Home, 2300 Whitney Ave., Hamden.