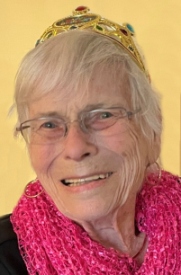 Carol Lee Miller, 89, of Wallingford, loving wife of the late Paul H. Miller, passed away on May 8, 2022 at MidState Medical Center. Born in Cincinnati, OH on August 3, 1932, a daughter of the late Carl and Helen Hummler Jensen, Carol is survived by her daughters, Linda Miller and Kimberly Bradley, and son Paul Miller, Jr. She was the proud grandmother of Rachel Miller, Michael (Ale) Miller, Ian Miller, Colin Bradley, and Harry Bradley, as well as proud great-grandmother of Tara Miller. After attending Middlebury College and Northwest University and receiving her Bachelor’s degree, Carol married Paul in 1955 in Cincinnati, OH. They then spent some time living in NYC and Woodbury, NJ. While Paul served in the U.S. Army, they lived in New Mexico and Germany. After his honorable discharge they settled in Meriden, CT, where they raised their family.
Carol enjoyed volunteering at the Newington Children’s Hospital, Meriden Public Library, and New Britain Museum of American Art. Carol and Paul enjoyed golfing together; she was the proud 9-hole champion at Shuttle Meadow Country Club. They enjoyed traveling to St. Croix in the winter, and spending time on Three Mile Island in Lake Winnipesaukee each summer. Boating on the lake was a favorite pastime. Carol was an avid reader of mystery novels, and has passed on her love of reading to her children and grandchildren. She held a special place in her heart for her close knit circle of friends that included the Schultzes, the Rybecks, and the Moshers.
A memorial service celebrating Carol’s life will be held on Saturday, May 21st in Beecher & Bennett-Flatow Funeral Home, 48 Cook Ave., Meriden. Calling hours will begin at 12:00 pm, with a short service to be held at 1:00pm. Her family asks that in lieu of flowers, donations in her memory be made to a charity of one’s choice.