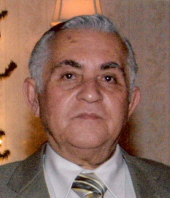 Cesar Agusto Rodriguez, 74, of Meriden , passed away after a long illness, on November 12, 2011 . Born on December 5, 1936 to the late Juan and Sheila Luciano Rodriguez. Cesar is survived by his wife of 49 years, Rosa Santiago Rodriguez; daughters, Mayra Fraticelli and her husband Antonio, Melba Rodriguez; son, Cesar Rodriguez and his wife Marilyn all of Meriden; siblings, Sonia Rodriguez of Adjuntas, Puerto Rico, Luisa and Edwin Rodriguez both of Ponce, Puerto Rico; grandchildren, Jemari Francoeur and her husband Peter, Ivette Gonzalez and her husband Jose, Zuleyka and Jamilette Rodriguez all of Meriden; great-grandchildren, Lismari and Lyairah Fraticelli and Mia Francoeur. Before retiring Cesar worked for Smurfitston as a machine operator and in his free time enjoyed playing pool at the Meriden Senior Center . Cesar was a good man, husband, father, and grandfather; we will miss you always. The family would like to thank the staff at Meriden Center and the employees at MidState- Pavilion C for their compassionate care during Cesar's time with them. A Mass of Christian Burial will be celebrated in St. Rose Church, 35 Center St. , Meriden at 3:00 p.m. on Tuesday, November 15th. Friends may also visit with his family earlier from 12:00 to 2:30 p.m. at BEECHER & BENNETT- FLATOW FUNERAL HOME, 48 Cook Ave , Meriden . Burial will be private.