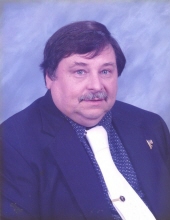 Charles Arthur “Artie” Rule, 68, went home to be with the lord on Friday, April 13, 2018. He was born on September 25, 1949, son of the late Ernest and Eva LaCombe Rule. Artie was employed by Salvation Army where he met his wife Carol. They were married for several years before her passing. He also worked for the State Police Barracks for many years. Artie loved Dunkin coffee and was an avid fan of the NY Giants and NY Yankees. He also loved bowling, crafts and his apartment was a gallery for his paintings and projects. Artie was a long time member of the First United Methodist Church in Meriden. He is survived by his sisters Eva Sands and her husband Donald of Meriden, Mary Ann Gerry of Unity, ME, and Sarah Rule of Meriden; and brother Ernest Rule of Meriden. He is also survived by many cousins, nieces, nephews and other family members. Artie was predeceased by his brother Robert Rule. His family would like to extend special thanks to Carol Savage and all the staff of R.M.S. for years of service and care. Relatives and friends are invited to visit with Artie’s family on Wednesday, April 18, 2018 from 9:00 to 11:00 a.m. at Beecher & Bennett-Flatow Funeral Home, 48 Cook Ave., Meriden. His funeral service will follow at 11:00. Burial will take place in Walnut Grove Cemetery.