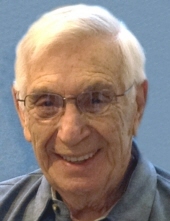 Chester Katzman, 93, formerly of North Haven, passed away at the Masonic Home on Tuesday, August 27, 2019. Born in New Haven on September 16, 1925, he was the son of the late Maurice and Rose Adelman Katzman. He was the husband of the late Natalie Wasserman Katzman for 68 years. He leaves 3 children, Karen (Andrew) Brecher of Newington, Terri (Tim) Connellan of Southington, and Bruce (Robin) Katzman of Cheshire. Also survived by 6 grandchildren, Rachel (Clay) Daricek of Cambridge, MA, Sherry Brecher of London, Jonathan (Kelly) Connellan of Southington, Kevin (Annie) Connellan of Avon, Katie Connellan of Hawaii, and Michaela Katzman of West Hartford, and 5 great- grandchildren, Brianna and James Connellan, Ethan and Natalie Daricek and Zoey Connellan. He was predeceased by his brother Richard Katzman. Chester was brought up in West Haven, joined the Air Force and graduated from Bryant College. He ran his own Public Accounting firm for 45 years, was elected President of the CT Association of Professional Accountants (CAPA) and was appointed as the Executive Director of the CT Association of Professional Accountants. He was elected Worshipful Master of Cosmopolitan Lodge and was elected as Worthy Patron of Laurel Link. The Order of the Golden Chain appointed him as District Deputy of the State of CT and served as the Dad Advisor of Duchess Court Order of the Girls of the Golden Court. Chester was the Treasurer of the North Haven Little League and coached his son's Babe Ruth team. His family would like to thank the staff at the Masonic Healthcare Center. They treated Chester and Natalie with loving care and the dignity they both deserved. Friends are invited to visit with his family on Friday, August 30th from 9:00 to 10:00 a.m. at BEECHER & BENNETT, 2300 Whitney Ave., Hamden. His Funeral Service will begin in the funeral home at 10:00 a.m. followed by Burial with Military Honors in Walnut Grove Cemetery, Meriden. Contributions may be made to the Alzheimer's Association of CT, 200 Executive Boulevard, Suite 4B, Southington, CT 06489 or to the Masonicare Charity Foundation, 22 Masonic Ave., Wallingford, CT 06492.