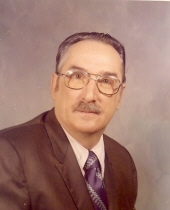 Meriden - Chester Stanley Ambrose, passed away on Sunday, May 3, 2009 at Meriden Center. He was born August 3, 1919 in Brunswick, ME a son of the late John Henry and Grace (Talbot) Ambrose. He was an Assemblies of God Minister since 1971 and a former Ironworker from Local 424 (New Haven). He pastored churches in Waterbury and Putnam CT and also South Carver, MA. He was a member of the Masonic Lodge (York Right) and most recently a member of the Assembly of God Church on Paddock Ave, Meriden, CT. Chester proudly served his country during World War II on the USS Bear in the U. S. Navy. He is survived by a daughter, Patricia Lee and her husband Larry of Star, NC, a son; Floyd Ambrose and his wife Linda of Meriden, and six grandchildren, Frank Brady and his wife Linda of Asheboro, NC, Shaleen Phelps and her husband Tim of Supply, NC, Floyd Ambrose Jr of Meriden, Barbara LaReau and her husband Jim of Avon, CT Tracy Palacio and her husband Bryan of Glastonbury and Nichole Kashur of High Point, NC. He is also survived by nine great grandchildren and his special cat, Kerry Ann who brought him much joy. He was predeceased by his first wife, Sabina Kammerer Ambrose and his second wife, Ruth Haglof Ambrose. A Memorial service will be held in Wilmington, North Carolina at a later date. The Beecher & Bennett-Flatow Funeral Home, 48 Cook Ave., Meriden is in charge of the arrangements.