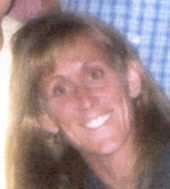 'Earth has no sorrow that heaven cannot heal.' - Thomas Moore After a valiant, inspiring 19 month struggle with a brain tumor, our Christine Brown Pallotto Kucinskas left this earthly life. On an exquisite day, May 15, 2009, next to the water at Connecticut Hospice in Branford, Chris's last breaths were taken as she was surrounded by family. Born October 4, 1963 to Judy and Bud, raised in Manchester, CT, Christine was the middle of the three Brown girls. Childhood summers were spent at Misquamicut Beach where she connected to a lifelong friend. Early interests included music, art and gymnastics. An accomplished tennis player, Chris became all-state competing for Manchester High School (class of 1982) with her doubles partner, Joann. She completed her education at Southern Connecticut State University and the Stone School of Business. Settling in Bethany and Woodbridge, Christine became the active, involved mother of four children. A diligent, accomplished worker, Chris was employed in many capacities throughout the years, most recently at Santoro Development and CCIM. An absolute creative genius, Christine's talents were unending. Her incredible gardens and flair for design allowed her to be a part of the Woodbridge Garden Club for a time. Her imaginative ability was abundant in every project or endeavor she undertook. Her inspiration to a generation of young athletes was evident in her dedication to the Woodbridge Running Club. Left devastated by the void of Chris's loss, but comforted by the peace she now experiences are her family and friends: her parents, Clarence and Judith Brown of Harwinton, sisters Sue Brown (Scott) and family from Manchester, Toby Schoeneberger (Mike) and family from Vernon. Her children, Brett, Paige, Dane and Reid Pallotto of Woodbridge. Her cousin and best friend, Beth Cohen and her husband Brad and their family. This summer Christine became a widow after an intense, incredible bond was created between her and her husband Kevin Kucinskas. They were married a short time before Christine was diagnosed and together they shared a love like no other. Her step daughters, Jaime Kucinskas from Bloomington Indiana and Kim Kucinskas from Cork Ireland and her husband Brian. Her mother in law, Peg Kucinskas from Torrington and Kevin's brothers and sisters. The remarkable support Christine received from the Woodbridge community throughout her illness and the death of her husband has been truly appreciated. The special friends Chris leaves are too numerous to mention. We will forever be grateful for the support from the Yale Brain Tumor group, especially Dr. Knisley and Sandy; and the beautiful angels that supported us at Connecticut Hospice. A Memorial Service will be held at Trinity Church, 33 Center Rd, Woodbridge on Tuesday, May 19th at 2 p.m. Friends may visit with the family on Monday, May 18th at BEECHER & BENNETT, 2300 Whitney Ave., Hamden, from 4 to 7 p.m. Interment will be private. In lieu of flowers memorial contributions in Chris's memory may be sent to Running for Chris, at Peoples Bank, 198 Amity Rd., Woodbridge, CT 06525.