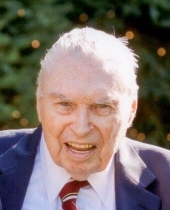 Clarence Arnold Carpenter, Jr, 94, of Meriden, passed away on November 18, 2014 after a short illness. Born in Providence, RI on April 7, 1920 to the late Clarence A. and Edith Grube Carpenter. Clarence was married for 49 years to Mary Kelly until her death in 1998. He was able to find joy again when he married Jeanette Lilienthal, in 2001, they spent 4 years together until her death. He is survived by his son, John Carpenter & his wife Lee of Meriden; grandsons, Derrick Carpenter & his wife Michaela Sullivan of Vernon, CT and Jonathan Carpenter & his wife Cerra of San Jose, CA; his siblings, Jeremiah Carpenter of Warwick, RI, Genevieve Dyer & her husband William of Warwick, RI, Barbara Devoe & her husband Wilbur of FL; brother-in-law, Paul Tinajero of Arizona; step-daughter, Nancy Currlin, her husband William and their daughter Jenna of Middlefield CT. He is also survived by several nieces and nephews. He was predeceased by his daughter, Stephanie Carpenter; sister, Edith Tinajero; and sister-in-law, Milly Carpenter. Clarence grew up and raised his family in Warwick, RI before moving to Meriden in 1968. A proud WWII Veteran, he flew on missions over Africa. After his retirement from auto parts sales, he returned to college to pursue the dream that he had to give up when he was called to serve in WWII. He then obtained his real estate license and started a second career selling real estate. He was a long time communicant at St. Rose Church and a member of the Knights of Columbus having served as Faithful Navigator in Meriden. As an active member of the Knights in Warwick and Meriden, he called bingo for many years. An avid sports fan, he rooted for the Red Sox and Patriots. He loved playing cards, and sharing his card tricks. He enjoyed playing golf and worked as a ranger at Hunter golf course in his retired years. In his youth he competed in roller skating competitions. The family would like to thank the staff of Westfield Care and Rehab for their excellent care and compassion. Friends are invited to visit with his family on Thursday, November 20th from 4:00 to 7:00 p.m. at BEECHER & BENNETT- FLATOW FUNERAL HOME, 48 Cook Ave, Meriden. Mass of Christian Burial will be Celebrated in St. Rose of Lima Church on Friday morning at 10:00 a.m. followed by burial with Military Honors in the Middletown Veterans Cemetery. Contributions in Clarence's memory may be sent to Knight of Columbus Charities, One Columbus Plaza, P.O. Box 1966, New Haven, CT 06509 or www.kofc.org.