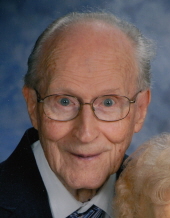 Clarence C. Siglin, 91, beloved husband of 68 years to Gertrude Rausch Siglin of Hamden, passed away peacefully August 23, 2012. He was born in Palmerton, PA, January 7, 1921 a son of the late Amzie and Etha Nothstein Siglin and had resided in Orange for 35 years before moving to Hamden in 1990. Clarence was employed by the Knudsen Brothers Dairy of North Haven as a bookkeeper for 28 years prior to his retirement. He was life long active member of the Trinity Evangelical Free Church of Woodbridge, and found enjoyment with his family, his trains, and working on his cars. In addition to his wife Gertrude, he is survived by his children and spouses, Joan (Warren) Darby of Brewerton, NY, David (Meredith) Siglin of Penn Laird, VA, and Lynne (David) Gough of Manchester, CT. He is also survived by his loving grandchildren, Kim, Jeremy, Jared, Chad, Kent and Suzanne, and his 3 great-grandchildren, Chase, Courtney and Jameson. Mr. Siglin was predeceased by a granddaughter Robin Darby in 1983, a sister, and 2 brothers. Friends may visit with his family Friday (TODAY) at BEECHER & BENNETT, 2300 WHITNEY AVE., HAMDEN from 5-8 p.m, and are invited to attend a Memorial Service on Saturday August 25 at 1 pm in the Trinity Evangelical Free Church of Woodbridge. Interment in Beaverdale Memorial Park will be private. Contributions in his memory may be sent to the Trinity Evangelical Free Church, Memorial Fund, 33 Center Rd., Woodbridge, CT 06525.