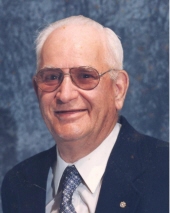 Wallingford- Clarence E. Cyphers Jr., the son of Clarence E. Cyphers, Sr. and Ruth B. McCormick-Cyphers died peacefully on Thursday afternoon October 16, 2014 at the Masonic Healthcare Center in Wallingford. The second of eight children, 'Bud' was born in Greenfield, MA on October 20, 1922. He grew up in Saybrook and Westbrook, CT, helping on the family farm. He joined the U.S. Coast Guard in 1942 and patrolled the Pacific Ocean and Bering Sea during World War II. He was with the American task force planning to invade Japan when the atomic bomb was dropped there. The invasion was cancelled when Japan surrendered. On March 1, 1944 he married Claire Harriett Baldwin of Meriden, where they lived happily for over 40 years. Bud was discharged from the service in January 1946. He learned the craft of brick masonry and built many brick homes in the Meriden area. He worked for decades as an operative mason, crew chief, and sales manager for Industrial Refractories Co. and A.P. Green & Co., in the New Haven area. He was a member of the International Union of Bricklayers for over 50 years. He was an avid deer hunter and fisherman. He would often work all day and then go fishing until dark. Bud was a Scoutmaster of the Meriden Troop 6, Boy Scouts of America. He joined the Meridian Lodge #77 Ancient Free and Accepted Masons, and became Master of the Lodge in 1966. Bud and Claire were loyal member of Center Congregational Church, the Meriden Silver Squares Dance Club and Meriden Grange. His passing has deprived us of the joy of his fellowship and laid a burden of sorrow upon our hearts, but it cannot rob us of those hallowed memories which linger in our minds, and which will, in time, dull the sharp edge of our sorrow. Clarence 'Bud' is survived by his children, M. Lynn Cyphers of Burlington, VT; Clifford K. (Nancy) Cyphers of Bethel, VT and Jacquelyn L. (Steven M.) Cyphers-Cohen of Wallingford, three grandchildren; Daniel and Wendy Cohen and LeAnne Cyphers and a brother Albert (Eleanor) Cyphers of Westbrook, CT. A funeral service will be held on Thursday, October 23, 2014 at 11 am at Beecher & Bennett-Flatow Funeral Home, 48 Cook Ave., Meriden. Burial will be at the convenience of the family. Relatives and friends may call at the funeral home on Thursday from 10-11 am, prior to the service.