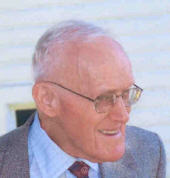 Clarence Joseph Eliason, 98, of Cook Hill Rd., Cheshire, passed away on June 28, 2011. Clarence was married for 67 years to the late Clara Bensen Eliason, who died in 2009. Born in North Haven on June 24, 1913 to the late George and Bertha Anderson Eliason, Clarence grew up in North Haven, graduated from Hillhouse High School in New Haven and attended Yale University. Clarence was a resident of Dighton, MA for 52 years before moving to Elim Park in 2003. He was a member of the Trinity United Methodist Church in Taunton, MA and later a member of the Rehoboth Baptist Church. After serving in the US Army, he worked for over 36 years at Hedge & Mattheis Company as a salesman and manager, and served as its president for the last five years. He later worked for the American Pile Driving Company. Clarence is survived by his daughter, Karen McFeely and her husband Drake of Chappaqua, NY; two sons, Frederik Eliason and his wife Carolyn of Suffern, NY, and Clifton Eliason of Winthrop, ME; six grandchildren, Douglas, Kenneth, Jeffrey Eliason and Matthew, Eric, and Laura McFeely; a brother, Alton Eliason of Northford and many nieces and nephews. In addition to his wife, he was predeceased by one sister, Elizabeth Walker, and five brothers, Edwin, George, Raymond, Chester and Harold. His Funeral Service will be held in the Nelson Hall at Elim Park, Cheshire, on Saturday, July 2nd at 1 p.m. A reception will follow the service. Interment will take place in Rehoboth Village Cemetery, MA at a later date. BEECHER & BENNETT FUNERAL HOME, 2300 Whitney Ave., Hamden in care of arrangements. To send a condolence please see obituary at www.beecherandbennett.com