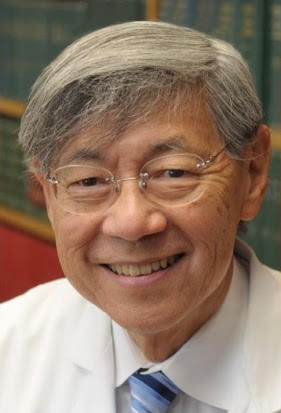 Dr. Clarence Takashi Sasaki, age 80, the Charles W. Ohse Professor Emeritus of Surgery, Yale School of Medicine, passed away peacefully with his wife holding his hand on February 4, 2021 at Smilow Cancer Hospital. Clarence was born in January of 1941 in Honolulu, Hawaii to Tsutomu and Carla Sasaki. He attended ‘Iolani School and received his undergraduate BA degree in philosophy from Pomona College with cum laude and Phi Beta Kappa honors in 1962. He later noted that his interest in writing was stimulated by late Professor Frederick E. Sontag who “Gave me the power of the pen, the discipline to persuade and the courage to express myself in ways beneficial to my profession.” He then attended Yale School of Medicine where he obtained his MD in 1966. Upon graduation, he was awarded the Keese Prize in Research.

His formal medical education was interrupted during the Vietnam Conflict. He served as U.S. Army Captain MC at the 95th Evacuation Hospital in DaNang, Vietnam, where his operative skills matured rapidly out of necessity and earned him an Army Commendation Medal. He was honorably discharged with the rank of Major and returned to Yale-New Haven Hospital to complete his residency.

Upon completion of his training in 1973, Dr. Sasaki joined the Yale School of Medicine faculty and rose quickly through the academic ranks to become Chief of Otolaryngology in 1981. For the next three decades, as the longest serving Section Chief, Dr. Sasaki led otolaryngology at Yale to preeminence, both nationally and internationally. He contributed to developing destination programs in head & neck cancer surgery, laryngology, and skull base surgery as he directed the care of thousands of patients. His clinical contributions and establishment of multidisciplinary disease management aided the development of Yale’s Head and Neck Cancer Program at Smilow Cancer Hospital.

In his life-long devotion to scientific research and discovery, he served as Principal Investigator on eight NIH funded grants, served full consecutive appointments as member on three NIH Study Sections and on the NIDCD Board of Scientific Counselors. His laboratory developed the first neurophysiologic model for laryngeal reflexes in SIDS, the first 2-deoxyglucose brain imaging model for central tinnitus, and recently developed a novel model for acidic bile-reflux induced carcinogenesis of the laryngopharynx. His interest in research and investigation resulted in publication of 420 journal manuscripts and six textbooks.

Dr. Sasaki’s prominent career was distinguished by his dedication to the academic mission, and as a champion of surgical leadership at Yale. One of his true passions was mentorship and he had a formative role in training generations of medical students, otolaryngology residents and post-doctoral fellows who have gone on to remarkable careers in academic and private medicine. The annual Clarence T. Sasaki Lectureship in the Department of Surgery was established in 2019 in recognition of these contributions.

His colleagues at Yale and collaborators throughout the world will remember him as a dear friend, a dedicated physician, and classic automobile enthusiast who enjoyed exploring the globe in search of food and wine experiences as well as tending to gardens at home. Most importantly, Clarence, a fifty-year resident of Branford, CT, was a loving husband and a dedicated father. He is survived by his beloved family: his wife of 53 years, Carolyn; their two sons and their wives: Peter and Jackie, and John and Rachel; his brother Gordon and his wife Joanne; niece Lindsey Kogasaka, her husband Kendall, and their sons Sebastian and Theodore; nephew Matthew; sister-in-law Beth Lindahl; and brother-in-law Robert Lindahl.

Private services are in the care of BEECHER & BENNETT, 2300 Whitney Ave., Hamden. A memorial celebration will be scheduled for a later date. In lieu of flowers, contributions in memory of Dr. Clarence Sasaki can be made to The Fund for Yale New Haven Hospital, P.O. Box 1849, New Haven, CT 06508 or online at http://www.givetoynhh.org/. Contributions can also be made to the Division of Otolaryngology at Yale School of Medicine at https://medicine.yale.edu/about/giving/.