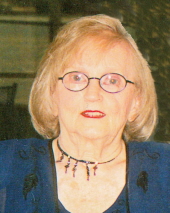 Constance 'Connie' M. Buller Mowry, 97, of North Haven, passed away on June 5, 2014 surrounded by her family at YNHH after a short illness. She was born in New Haven on November 15, 1916 to the late Joseph and Lillian Thomas Clerkin. Connie was predeceased by her two husbands, Claude Buller and Albert Mowry. She is survived by her children and their spouses, Claude Buller III & Carolyn of Greensboro, NC, Dennis Buller & Patricia of North Haven, Sharon Kuhn & Dieter of Killingworth, and Dorothy Boughton of North Haven; grandchildren, Dennis Jr., Kevin, Jennifer, & Sarah Buller, Kelly Close, Heidi Haslam, Malinda Cloutier, Michelle Carey, Donald Jr. & Brian Boughton; and seven great-grandchildren. She is also predeceased by her son-in-law, Donald Boughton. Connie is a graduate of Larson's College and worked as an executive secretary at several different companies. She was a choir member at St. John's Episcopal Church in North Haven for many years. Connie was a prolific reader and was known for her great sense of humor. She enjoyed time spent with her family, but her grandchildren and great-grandchildren were her life. Friends may visit with her family at BEECHER & BENNETT, 2300 Whitney Ave, Hamden, on Saturday, June 7th from 9:00 to 10:00 a.m. Funeral Service will take place at 10:00 a.m. at the funeral home, followed by interment in Centerville Cemetery. Contributions in Constance's memory may be sent to The Animal Haven, 89 Mill Rd, North Haven, CT 06473 or www.theanimalhaven.com.