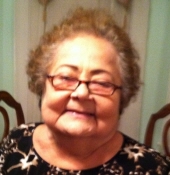 Meriden - Cristina Cardona, 78, wife of the late Pedro Cardona, died on Sunday, January 13, 2013 at MidState Medical Center. She was born February 24, 1934 in Aguada, Puerto Rico a daughter of the late Manuel Ruiz Burgos and Filomena Torres Crespo. Cristina was a devout catholic as a member of St. Rose of Lima Church where she was very involved in many of their organizations. She had worked as a seamstress for many local companies before retiring. Everyone knew her as 'Mama Tina', she exuberated love to all she met. She is survived by a daughter Wilma Ramos and her husband Noel of Meriden, a son, Pedro Cardona and his fiance, Migdalia Gonzalez, seven grandchildren; Carlos (Tony) Cardona, Pedro Cardona Jr., Lucenia Rosado, Christina Cardona, Judith Chanman, Victor Ramos and Jacob Ramos and six great-grandchildren; Jasmine, Jalyssa, Natali, Jayden, Xsiah and Naviah. She also leaves six sisters, Carlota Cardona, Virgina Perez, Domitila Ruiz, Elsie Delgado, Lucy Ruiz and Vina Gonzalez, two brothers, Jesus Ruiz and Francisco Ruiz as well as many, many nieces, nephews and cousins. She was predeceased by two sisters, Capistrana Ruiz and Maria Ruiz. A funeral will be held on Wednesday, January 16, 2013 at 8:30am from the Beecher & Bennett-Flatow Funeral Home, 48 Cook Ave., Meriden. A Mass of Christian burial will follow at 10am at St. Rose of Lima Church, 35 Center St., Meriden, followed by her burial at Sacred Heart Cemetery, Meriden. Relatives and friends may call at the funeral home on Tuesday, January 15 from 4-8 p.m.